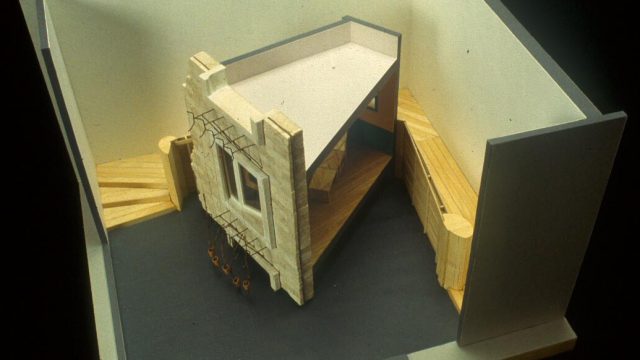 From The domestic project – the home of man: archetypes and prototypes, vol. The projects, catalog of the XVIth Triennale di Milano, Electa, Milan, 1986 Assumption of the project is the conviction that even today’s man continues to aspire to a well-defined, fixed, comfortable and even pleasant living space. An approach therefore far from the EON of cars, caravans and men with bags in continuation in perennial shift, towards which we want to make the evolution of living. With respect to the problem of energy, a widespread ecological conscience is established. From these considerations a project proposal is born: a window-frame designed for the window of any room overlooking a side not exposed to the north prototype does not purely be a device to reduce energy consumption ensi take advantage of other functions of the window qualifying for living: the function of source / filter of light and ventilation and that of selective view on the screen, on nature and on the city, on the flow of the day and the seasons. The use of different materials for thermal behavior visual effect is intended to highlight these effects. Description: glass-window, wood, iron-window frame, composed of a part with an opening door made entirely of wood with thermal joints and a greenhouse part, bounded by four glass doors, two fixed and two openable, arranged so as to maximize the capture of the sun’s rays, using the best orientation + or -20 degrees south) In the greenhouse: the two external doors (capturing surfaces) have metal tills and simple glass, while the inner frames are made of wood and glass double and one of bone door at the top and at the bottom of the movable wings with the function of regulating the circulation of the air towards the room, the horizontal plane in opaque dark and rough material acts as an element of accumulation; the vertical shoulder in sheet metal & treated with special paint for absorbing purposes The vertical shoulder facing west is made of clear, glossy, reflecting material; under the window sill are placed iron elements with the function of registers the support rods to support the climbing green provided for against the summer overheating. At the core: close to the curtain, sliding curtains in heavy fabric for resolving and rotting of the night; a room of such size and shape that allows direct deep retreating with the bottom wall (dark color) and the floor (dark wood) trimmed as storage elements and very thick external walls in materials with high thermal inertia with insulated layer.