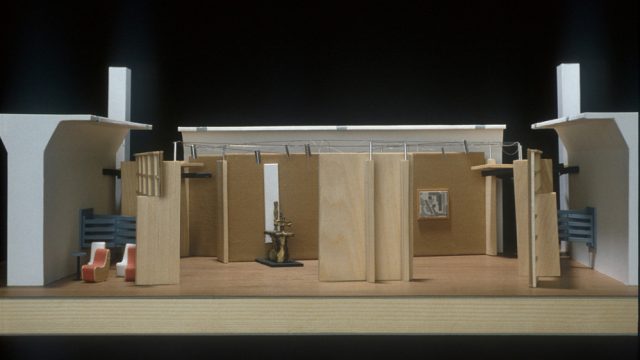 The exhibition of Friederick Kiesler, the latest in connection between the parties: there are several references to the photographic and a video room.This space works galactic research is located in the Galleria dell’Architettura della Triennale, a large space compared to the number of works exhibited: paintings and sculptures of the most varied materials alternate with drawings and photographs that trace the entire creative process of Kiesler, a galactic system, while on the one hand the intrinsic quality of images on Kiesler’s life and career. The galactic form is based more on the relationships of resiguous number of exhibited works, which, in their singularity, are characterized as strongly different between the same spacing between the parts is made possible by them for meaning and materials. Precise space through a series of vertical chipboard panels, covered in jute and ros horizontal metal atoll, which support a large flamed canopy, arranged “irregularly”, so that the structure itself becomes the Kieslerian theory element of the open form, called galaxy, which introduces the discontinuity into continuity, where continuity becomes readable through a set of fragments governed by a balance that makes the whole characterize as integral parts of the exhibition: the photographic sections gather, behind appropriate cases, the entire creative process of the artist; the video room instead, with a screen and black velarium on the ceiling, projects spaces are equipped with multipurpose chairs and swings, works by Kiesler. These fluid and multifunctional objects in ash and linoleum wood can be used both as seats and as support for the works on display. Report that on the uniqueness of the single parts, the formal weight that the works are able to assume. The accesses are underlined by the crossing of two elements Finally, to relate to the ceiling of the Triennale Riva has created an illusory ceiling of steel cables that introduces the visitor into the exhibition space.