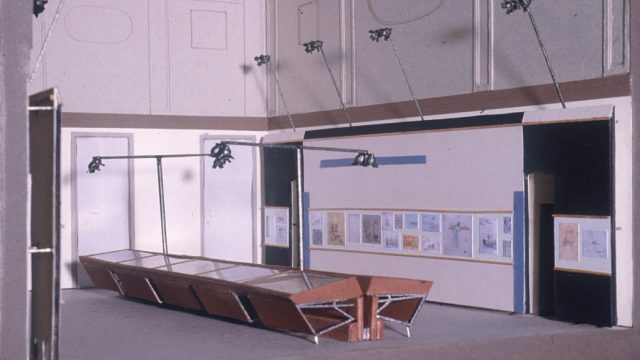 The Palazzo Barbaran da Porto is designed with simple elements: specially designed tables, panels and supports, arranged neatly in the free space and along the walls, made with different colors and lighting. In the central hall, on the main floor of the building, are exhibited the projects of the municipal theater of Vicenza and of the houses of Vicenza. The panels on the walls are arranged only on two sides, detached from the walls, they do not reach the height of the cornice, so that the Palladian measurements remain unaltered. The panels are made of painted fireproof chipboard, spaced from the walls by iron tubular elements. In order to improve readability and enhance the original character, Riva plans to display the drawings on glossy paper, simply by applying them with cardboard points on a light blue background.

Carlo Scarpa was an Italian architect, influenced by the materials, landscape, and the history of Venetian culture, and Japan. Scarpa translated his interests in history, regionalism, invention, and the techniques of the artist and craftsman into ingenious glass and furniture design. His architecture is deeply sensitive to the changes of time, from seasons to history, rooted in a sensuous material imagination. While most of his built work is located in the Veneto, he made designs of landscapes, gardens, and buildings, for other regions of Italy as well as Canada, the United States, Saudi Arabia, France and Switzerland. One of his last projects, the Villa Palazzetto in Monselice, left incomplete at the time of his death, was altered in October 2006 by his son Tobia. This work is one of Scarpa’s most ambitious landscape and garden projects, the Brion Sanctuary notwithstanding.