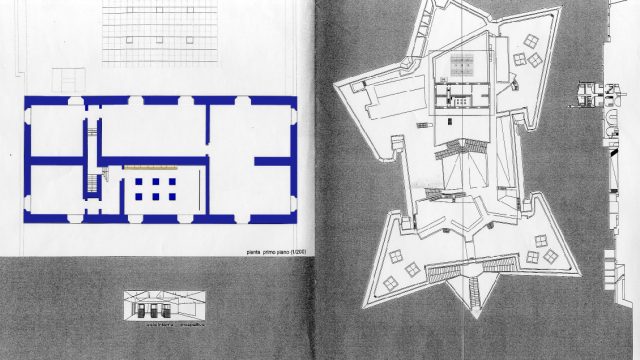 Born in 1939 in Italia, Cerri became architect and designer, following the courses of Politecnico de Milano. He participated in the foundation of Gregotti & Associati, winning several prizes. But he also made is path in design, through the designing of different publication houses.

The geographical and historical exception of the place, Forte Belvedere in Florence, has directed the project for the preparation of the exhibition towards calibrated and minimal choices that favour the direct relationship between the exhibition structure, objects and surrounding space.

Some examples of the Ferrari collection are on the outside, in nine large cubes of seven meters on each side, consisting of a supporting metal structure covered with marble conglomerate, pear wood or corten steel, and equipped with simple marble or stone platforms. shatterproof crystal walls.

The overall layout of the exhibition draws three precise routes, through metal walkways that accompany the visitor from outside the Fort to the internal rooms. The preparation of these rooms proposes technical drawings and photographic material, displayed on rectangular or square pear-shaped panels protected by crystals. Also in these rooms are exhibited scale models of cars in parallelepipeds of Plexiglas.

The itinerary of the exhibition ends in the vaults of Fortaleza where an exploded model of an original F40 is positioned under an inclined plane of mirror allowing visitors to see the details of the car.