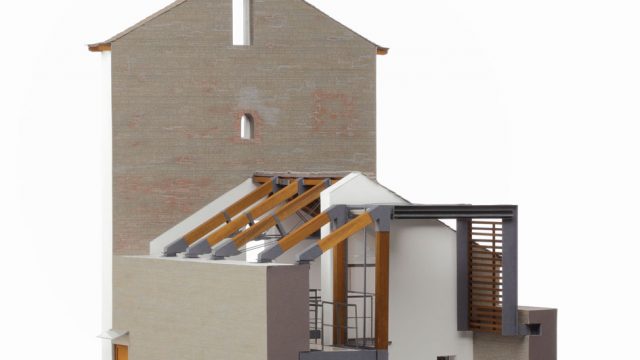 This work has been a long dialogue with the masters of Italian architecture Scarpa, Albini, Detti. With the Italian season that has placed in the project the reason for the survival of cultural and landscape heritage. I had been entrusted with a ruin next to the town hall garden with its secular cypress. Fifty years of abandonment had caused roofs and walls to collapse except for the first vertical part. In agreement with the client I proposed a ground floor for socializing and I distributed the rooms in the tower. Each original element has been reconstructed in the volumetry, transfiguring it with the external enclosure and covered with a wood-steel structure to release maximum light. The walls were reconstructed with irregularities in plan and section but plastered with lime. The exposed Beola has become plaster, the wooden decks have become reinforced concrete slabs, and the wooden tie rods have become iron structures. The 50 metre long living room was divided into separate places with light and space, anchoring the atrium to the double height, the gallery to the patio. Finally, the water room, with its mobile floor for sunbathing on the lake, with the deliberately unfinished reconstruction of the roof, so as to be able to capture the sky beyond the profile of the mountains from the living room, showing outside an “unfinished” that shows the construction and suggests the distance between critical and uncritical reconstruction.

Mauro Galantino was born in Bari in 1953, he graduated in Florence in composition in 1979, where he worked with Francesco Barbagli. On the occasion of the bicentennial project of the French Revolution he came into contact with Vittorio Gregotti and moved to Milan, where he collaborated with his studio from 1983 to 1987. In the same year he opened his own professional studio and began teaching at the the architecture school of Geneva, where he worked until 1994. From that date he taught as an invited professor at the University of Girona, at the Faculty of Architecture in Strasbourg, Parls Belleville, at the Polytechnic of Lausanne and, currently, is a professor associated with IUAV of Venice and the Polytechnic of Milan, where he leads the interior space workshop. He has participated in numerous international competitions, obtaining awards for the parliament buildings in Berlin and Vienna, in Florence, where he created a Europan 2 and in Milan, where he built a church. He has realized some school centers, in Arezzo, San Glovanni Valdarno and Arcore. He has under construction some Vintl competitions: the vicate cathedral of Modena for the Cel, the Sanpolino neighborhood in Brescla, and the Finsibl complex, Case del Sole. He participated, obtaining awards, competitions for the Modam and the lot of public housing in via Civitavecchia in Milan, the Memorial of deportation of Rivesaltes.