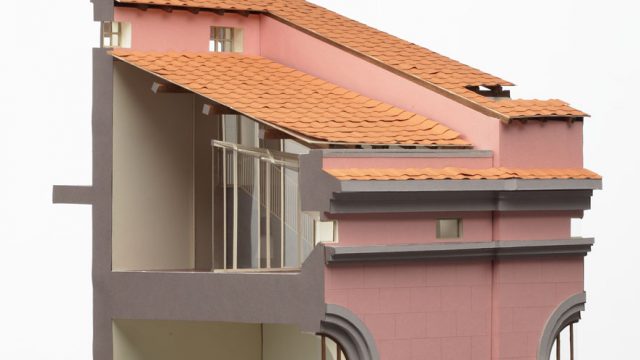 The Guissepe Verdi teatro was built between 1865 and 1867 by Andrea Scala, and had never been renovated for a century. The building was in deterioration, and couldn’t be used because of the outdated equipment. The building was dangerous and didn’t respect modern safety regulation. In 1986, a renovation began following the designs of Italian architect Massimo Carmassi. The project was thought through in order to both renovate the show room without traces of renovation and to make the building safer and equipped with modern technology.

Massimo Carmassi (1943- ) graduated in architecture from Florence University in 1970. He spent most of his career in Pisa, and received several national and international prizes. He is renowned for his renovations where he keeps the history of the building while adding modern elements.

To achieve this balance between ancient and modern, Carmassi chose authentic materials for the theatre room mixed with modern technics in order to comply the safety norms. Thus, the old wooden trusses were maintained but reinforced with resins and steel inserts. Most of the Division Walls were deemed useless and were destroyed. Some paintings were removed because too damaged, other repainted or restored. Carmassi also tried to restore light and space in the theater room, which he achieved using steel and glass diaphragms or by reorganizing the space.