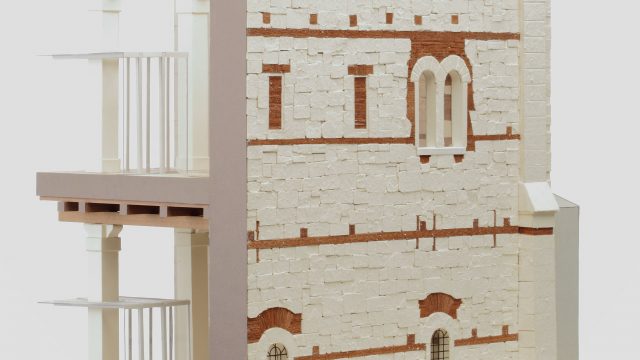 In 2003 a program agreement between the Municipality and the University established the new office of the Faculty of Economics and Commerce. The Santa Marta recovery project is an opportunity to implement the program of integration between culture and society with the opening of an area of ​​great value for the city of Verona and the historic Veronetta district. The realization was commissioned at the Università luav di Venezia. The care of the architectural part was entrusted to Massimo Carmassi. The task was to refurbish the real bakery with the headquarters of the Verona Faculty of Economics and to place it inside the grain silo six classrooms for educational activities. The functional program of the Faculty of Economics provided for the inclusion of seven large capacity classrooms. The classrooms have been created without interfering with existing walls and slabs, giving life to large transparent boxes made of dark glass. The objectives set by Carmassi have been to crystallize the spatial and structural organization of the building inside to secure all the structural equipment with the minimum use of means to maintain the readability of the preserved spaces, avoiding unnecessary fragmentation to obtain a better aesthetic quality and a higher level of comfort and pleasure for users to preserve the existing material and its visible surfaces, with its complex wall textures, colors, irregularities , the artisanal nature of the wooden roof structures the diversity of the various types of frames, the softness of the floors and stone stairs worn out by use. Overall, the project by Massimo Carmassi has demanded a selective and respectful orientation of the pre-existences and their history, aware of the complex and invasive function represented by the new destination of university use. And perhaps, as prophesied by the same Carmassi, the new university function will be the last before the definitive exit of the Western Silos from the life of the Scaliger city.

Massimo Carmassi is an Italian architect graduated from the Faculty of Architecture of Florence in 1970. He founded the Projects Office of the city of Pisa in 1974, which he then directed until 1990. he was president of the Order of Architects of Pisa and Province from 1981 to 1985. Among the various awards he received, in 1993, the Heinrich Tessenow Medal from Heinrich-Tessenow-Gesellschaft e.V. (Alfred Toepfer Stiftung F.V.S.) and in 2015, the Gold Medal for Italian Architecture. He was also nominated as an ordinary academic in the architecture class of the Academy of the Arts of Drawing in Florence and of the Academician of San Luca. He is a member of the Internationale Bauakademie Berlin and Honorary Fellow of the American Institute of Architects. His work takes place in both the restoration and the new architecture and urban design sectors. For many years he was Professor of Architectural and Urban Design at the University Institute of Architecture of Venice (IUAV) and previously taught “Architectural Design” at the Faculty of Architecture of Ferrara, Genoa, Turin, Reggio Calabria, at the Academy of Architecture in Mendrisio (University of Italian Switzerland), at the Hochschule der Kunst in Berlin and the Syracuse University in New York.