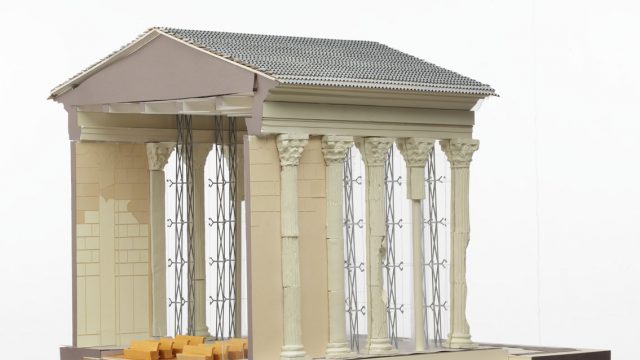 On the ruins of the Augustan Temple, unexpectedly re-emerged after the tragic fire that in 1967 upset the late-Baroque cathedral church that had been superimposed, a courageous (and very disputed) intervention of partial anastylosis was undertaken by one of the most known Italian museographers (Ezio de Felice) unfortunately interrupted at the end of the 70s. The Campania Region in July 2003 launched an International Design Competition for the Restoration of the Duomo Temple, which saw the participation of over eighty competitors and took place in two phases: in the first ten groups were selected, in the second one was declared the winning project. The latter returning to confirm the Temple’s historic second function of the Cathedral brings together the entire material legacy present on the site. In the cell and in the atrium of the Augusteo Temple the single nave of the new Cathedral is set up and the late-baroque liturgical spaces of the presbytery (altar, bishop’s chair, ambo, choir), the Chapel of the Most Holy (baptistery), the Chapter and the Sacristy are confirmed. In a complex combination of conservative restoration and new intervention Dezzi realizes in 2004 the recovery of the Temple-Cathedral of the Rione Terra in Pozzuoli (Naples), located above the archaeological remains of the Roman settlement. The ancient pronaos of the Temple of Augustus, then the Christian Basilica and then the Renaissance Cathedral, is incorporated into the single nave, made longer and slightly inclined towards the altar, while structural glass closes the lateral colonnades by carving out the profile of the columns.