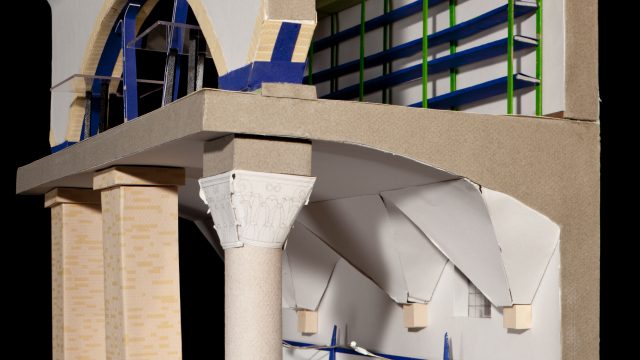 The Classense library, as an institution has always played a fundamental role in the cultural life of the city, with its bibliographical and documentary patrimony periodically enhanced by important legacies, becomes a focal point of observation within the city itself. The project by Marco Dezzi Bardeschi proposes the recovery of the historical cultural identity of the block of the former Monastery of Classe in Ravenna, with a conservation program characterized by the minimum intervention on the structures and the inclusion of autonomous elements that constitute a new element inside the history of the factory.The project proposes cultural historical recovery above all to humidity; on the other, the increase in an exhibition and lighting system in the former Monastery of Classe in Ravenna, with acquisitions, had underlined the tonomo and self-supporting; on the mezzanine floor towards a program of minimal intervention on the inexcharity and the inadequacy of the spaces destined instead re-opened the lowered arches, in the degraded structures and the insertion of elements previously to the conservation of autonomous books that constitute a new piece With the project by Dezzi Bardeschi in the history of the factory. The library presents, before the intervention, the former Class Warehouse and dormitories: the color choice very decisive, also taken two orders of problems: on the one hand the degradation on the ground floor a new mosaic floor in the structures for storage of the advanced books of the material structures, due to which a particular steel support is inserted, which is a strong sign in the consultation room for its shape and for the Manica Lunga area, which houses a cosmological representation , along the entire perimeter of the hall.