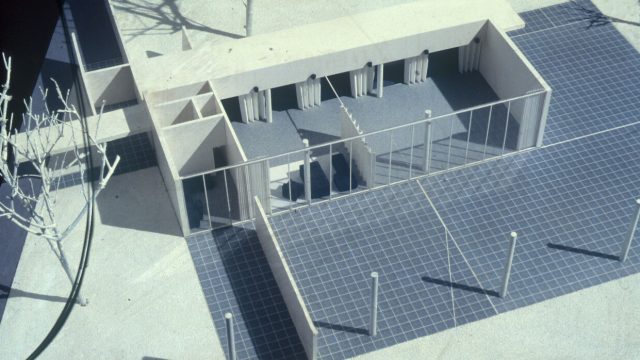 The” Casa Sportivo “, designed for the 1931 Bauastel of Berlin, corresponds to the ideals of rationalism and functionalism of those years and of the exhibition, whose program is clarified by Mies in the introduction, when he talks about need for change even in housing. “The house contemporary is elegant, divided by light partitions, which delineate the interior space and the large windows put in relation with nature “The house must presage such intentions, hope for a brighter life where living is pleasant. Two larger long windows showing that Breuer has picked up the external environment from which one separates himself not through elements of structure, but through simple curtains, a focal point is the large room equipped for sport, in which it is the encumbrance of furniture, the body of man, was supposed to be: on one side of the great hall a series of cabins, each with a different function, separated by folding doors from the large hall and connected by enfilade to the outside. The cabins are a kind of rationalizing element of the activities of man, a place for each function, separate, but connected (enfilade). The structure and of the superricie, with par prefabricated etiums, furnishing and furnishing with the architecture for which the furniture serve as patebe between the cabins, the rest is of type in cut the structure is identical with the form: tables, armchairs, sofas, tubular steel, studia depending on the shape of the body and the forms between analytical and organic. Breuer uses new materials such as granite, slate, acciam, nickel, chrome, me taili bianohi, Egii for the “house for a dirty, built with the help of a His assistant, Guatav Hassenflug, makes use of furniture he has designed and produced industrially, of elements such as sliding doors, equipment that can be easily found.The house is based on the open design on simple furniture (in white maple), it was a large rectangle broken by subsidiary spaces, function of changing room, bathroom, bedroom, study, dining room, the kitchen, the bathroom, and the room of the guests.These last ones have sliding doors. All furnishing is informal, flexible, easily separable and transformable. The use of the materials, the lightness of the furniture in tubular metailo makes the environment well articulated and welcoming. Breuer gives the definition of his profession in a few words: “The colors to be understood, the sounds to be seen, the void to be touched with the elbows, the taste of space on the tongue, the fragrance of the dimensions, the sap of the stone”.

Marcel Lajos Breuer was a Hungarian-born modernist, architect, and furniture designer. Breuer extended the sculptural vocabulary he had developed in the carpentry shop at the Bauhaus into a personal architecture that made him one of the world’s most popular architects at the peak of 20th-century design.