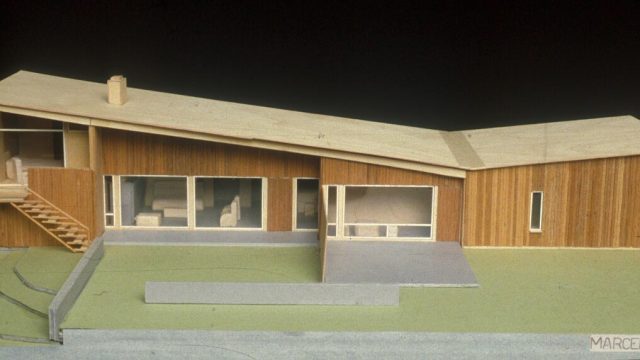 After the war, on the side of the reconstruction and of many construction experiments, the demonstration of houses was re-launched. In the USA the MoMA promotes in its garden in New York the construction of single-family houses designed by Marcel Breuer. This show house built in the sculpture garden of the Museum of Modern Art, was visited in 1949 by tens of thousands of visitors and had a huge influence on the domestic architecture of the United States. The plant has been studied for a medium family with two children. Both indoor and outdoor areas are intended for different activities. The left part of two floors can be added if more expansion is desired. Many of Breuer’s best-known finds are contained in this house; “Butterfly roof”, the parapets projected forward into space, which can be called the Breuer signature; and the vertical wooden walls. The kitchen is placed in the middle and thus becomes a kind of center of command of that house without servants; from it you can look both in the living area and in the children’s playroom. Parents live on the balcony side; the children in the opposite side. The two areas are visually connected: from the balcony of the parents’ bedroom you can see the playing room. The outdoor areas include an entrance for the car, separated from the service courtyard on the south side; and at the back an outdoor patio separated from the play area.

Marcel Lajos Breuer was a Hungarian-born modernist, architect, and furniture designer. Breuer extended the sculptural vocabulary he had developed in the carpentry shop at the Bauhaus into a personal architecture that made him one of the world’s most popular architects at the peak of 20th-century design