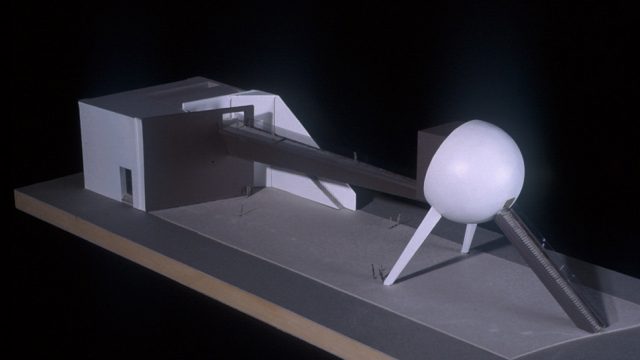 The Breda Pavilion of 1953 was the third of a series of pavilions designed by Luciano Baldessari during various editions of the Milan International Fair (1951-1959). This one was created in collaboration with the architect Marcello Grisotti.

The building was inspired by the theme: “La Breda: an industry in the world”. Also in this case, Baldessari summarized the main idea with an incisive sign: the sphere- an image of the terrestrial globe and an archetypal form. The pavilion consisted of two parts connected with a walkway that, although taking up the “processional” motive that had been already used in the 1951 Pavilion was wider and allows the passage of several people side by side.

On the ground level there was located the projection room with the “spatialist” ceiling, by Lucio Fontana. It was a 6×10 m panel suspended high above the movie watchers heads. Fontana perforated the panel with holes and created corresponding protruding elements that extended out of the visible side of the panel. They created long, sharp shadows, darkness and intervals of light, as the cinemas electrical ceiling illumination cut across the panel.