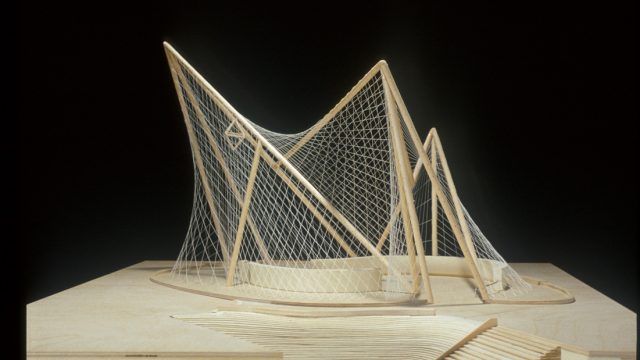 The pavilion was designed for the Expo ‘58 in Brussels. The form of the pavilion is a cluster of nine hyperbolic paraboloids and is the result of the collaboration between famous architect Le Corbusier and the engineer Iannis Xenakis. Even though the building was created for the Philips company, the main purpose of it was not to expose their products, but to illustrate what Philips technical progress was able to lead to.

According to architect’s intention, the pavilion was a real synthesis of arts and mathematics. Architecture and music were closely linked and resulted in hyperbolic paraboloid shapes. The form of the pavilion had to follow the concept of maximum free volume with the minimum of enclosing surface and provide the best acoustics. The concrete structure of the building played the role as a sound box and the virtual instrument itself.

The multimedia event that was taking place inside is known as “Le poeme electronique”. The 8-minute show was composed by Edgar Varese and was followed by the black and white movie. Additionally Xenakis’ music was played when the audience was entering or leaving the exhibition. The visual component included also two hanging objects, three projected still images and an elaborate lighting design.

The contemporary interior of the pavilion was created not only by the music and the projections, but also by the visitors, whose presence and movement inside was becoming the part of the exhibition.