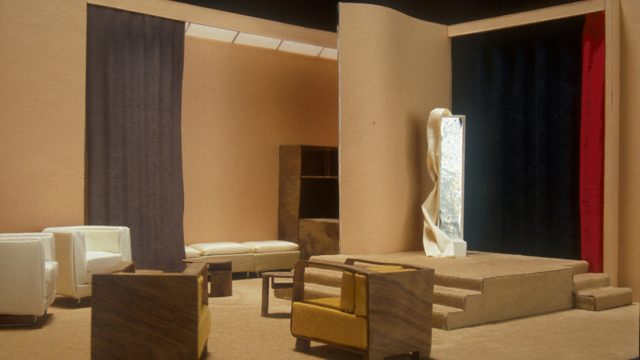 The first international edition of the modern decorative and industrial arts took place in May 1930, in the Villa Reale of Monza, following the foundation of the previous “artistic committee” directed by Guido Marangoni. The exhibition was born with the intent to promote modernity as a response to new needs, as freedom of invention and excellence of taste, even if the exhibition clearly distinguished the presence of two different stylistic groups: neoclassicists and rationalists. At the IV Exposition Terragni participates, compact together with Group 7, to promote the rationalist principles drawn up by the group: the Milan Triennial will be born from the outcome of the Exhibition, which later became the Triennale di Monza. The architect participates directly with the installation of an entrance hall, an atrium and a model room for modern tailoring: he designs the vestibule and the exhibition hall, which contains a stage for the fashion show with three-tone curtain: gray, red and black.