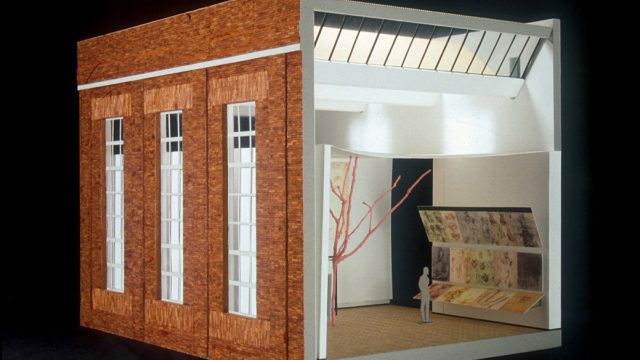 The installation is part of a larger exhibition, which dealt with the discoveries made by researchers and scientists during the fascist regime as a whole: the fields of science. The exhibitors thought to enrich the exhibition taking as a reference Leonardo, the scientist, the artist, the researcher by excellence.

This composition is influenced by Fausto Melotti’s work, a contemporary sculptor from Pagano.  He used geometric abstraction as metaphysics, to make a conceptual construction of modernity.

The main frame acts as a “scene” of a theater, where a metallic lattice supports the secondary frame. There rests the vitro cube containing a human heart. Therefore, he creates a fake perspective that attracts attention right on the heart, understood as the center of man, considered a symbolic starting point for the study of human anatomy.

The color of the walls, white, has been chosen to create a contrast with the colored panels attached to them. It shows the designs and writings of the artist. While the vertical elements are made of opaque material, the horizontal ones of the false ceilings are made of canvas, so as to allow light to enter from the overhanging skylights.