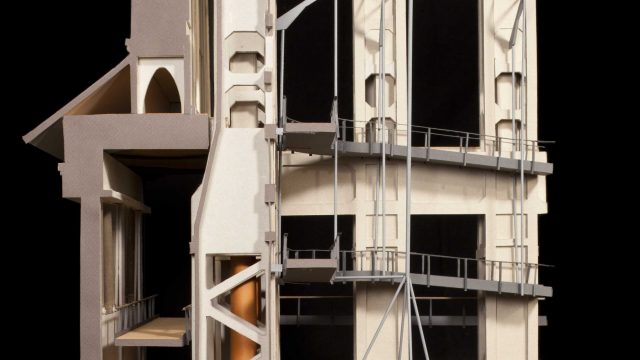 The building of the Mole, originally intended as a synagogue, was commissioned to Alessandro Antonelli by the Jewish community, which was emancipated by Carlo Alberto in 1848 with the issuing of the Statute Carlo-Albertino. The Antonellian design is defined by a square-based building with main access on Via Montebello structurally set on a double system of insulated bearing “fulcri”. It consists of a double perimeter of columns and pillars, and arranged according to a regular mesh. The main objective of the intervention of Gianfranco Gritella in 1994/99 is that of conferring on the Mole Antonelliana the role of seat of the National Cinema Museum which determined an architectural and structural restoration, a static technological, conservation of materials and decorations and planning of new infrastructures. The need for a new museum layout led to the creation of a path on walkways that allows to reach the various levels of the building. These walkways are supported by metal rods. The metal elements lean on the structures avoiding the demolition of the original Antonellian structure. All the new interventions are recognizable because they have been made with a different materials compared to those witch was characteristics for the building.