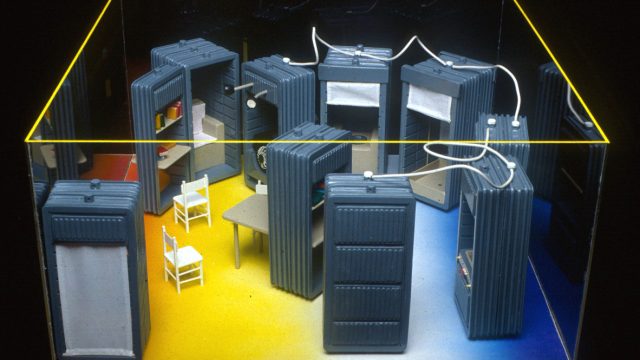 Ettore Sottsass was an architect, writer, artist and designer born in Inssbrück in 1917 and died in Milan in 2007. Graduated from the Politechnic University of Turin in 1939, Sottsass was the founder of the anti-design and later on, together with Aldo Cibic, Matteo Thun and Marco Zanini, cofounder of the Memphis movement. This movement believed in the importance of the social and cultural value of the object, as well as its esthetic function. The design was characterized by irony, kitsch, bright colors and change of scale to undermine the functional value of the object and question the conceptions about taste and good design. For the exhibition ‘Italy; The New Domestic Landscape’ in the Museum of Modern Art in New York, he created a ‘house environment’. The project has been realized as a prototype and consists of a system of containers, that can be organized in a flexible way. The spatial planning is caught in the rigid composition of the house. The containers contain all the elements that are needed to solve the needs of the industrial company: stove, shower, juke box. The numerous vertical ribs become elements of formal characterization. The color is neutral, light gray for the frame and both for the modular (inserted) parts. This environment is created to provoke a greater awareness of creativity and freedom.