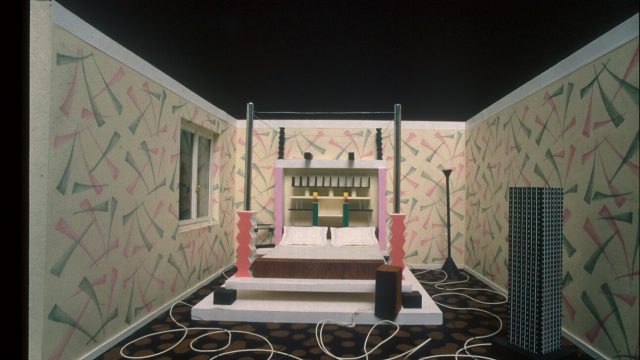 Ettore Sottsass was an architect, writer, artist and designer born in Inssbrück in 1917 and died in Milan in 2007. Graduated from the Politechnic University of Turin in 1939, Sottsass was the founder of the anti-design and later on, together with Aldo Cibic, Matteo Thun and Marco Zanini, cofounder of the Memphis movement. This movement believed in the importance of the social and cultural value of the object, as well as its esthetic function. The design was characterized by irony, kitsch, bright colors and change of scale to undermine the functional value of the object and question the conceptions about taste and good design. Because of his work, Sottsass traveled a lot and he discovered the difference in sleeping environments between different cultures. For the seventeenth Triennale of Milan, he made a design for a bedroom according to his own conception. The furniture that he created was an attempt to stop or rather return to the middle of the problem. It is an attempt to get back into the drawing, taking everything that happened and maybe even everything that did not happen. He made big and heavy furniture, to extract them from the kitsch of civil and bourgeois furniture. They do not bind with other pieces and therefore stand on their own. Because of this, they cannot make a style. The textures are chosen from those cultural areas that do not represent poverty at all, but are abandoned by an intention or intellectual prediction.