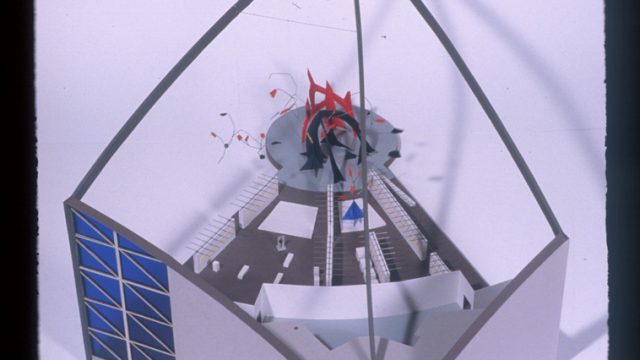 Cerri graduated from the Polytechnic of Milan where he teaches at the Faculty of Architecture after having been, together with Umberto Eco, professor of semiotics. He is a founding member of Gregotti Associati with whom he worked until 1998, the year of birth of Cerri Associati.

Renzo Piano was born in 1937, in Genova. He is an italian architect, but also politically involved as a senator. His main realisations such as the Pompidou Center, the NYT Building, The Shard tower made him one of the most famous architects of the modern movement.

The exhibition entitled ‘Alexander Calder retrospective’ was designed by R. Piano in 1982 inside the Palazzo a Vela in Turin, in the Parco di Italia ’61. The building in reinforced concrete in the shape of a sail has only three points of support on the sides and an enormous open space of 15000 square meters. Many are the aspects that were considered during the installation: the climatic environment obtained by closing the windows through opaque panels painted in dark climates inward; the ventilation system cooling the vault through the flow of water along its outer surface and the lighting creating the darkness and turning on the lights on the objects of the Calderian universe, entering the viewer and attracted by the freshness of the environment, then like a dream, as the eye adapts to the darkness, begins to see the objects on which the light is focused. The works exhibited along the radius of a circle meet one after the other, always having under their eyes the central reference point, the ‘focus’ that guarantees an automatic orientation system. Another important aspect of the exhibition is the enlargement of Calder’s signature, which is a little like the foreboding of the commuter movement of his work.