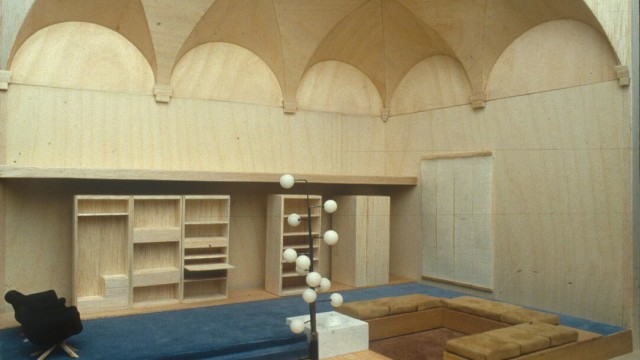 Born in Milan, Italy in 1929, Angelo Mangiarotti graduated from the Architecture School of Politecnico di Milano in 1948. As an architect, urban planner and designer, he mainly focused on the industrial process for buildings and design production, whose designs earned him awards in Italy and abroad.

“La casa abitata” is a project by Angelo Mangiarotti located in Florence, Italy. The wall consists of box elements in walnut wood with a fixed width of 96 cm, a height of 210 cm and a varied depth. These elements are mounted on sliding wheels,  while some of the other can rotate themselves 360 degrees. In any position the space gives a feeling of having infinite variations of it and being able to change and control it. Functions are differentiated according to clearly defined needs: wardrobe, storage for books and objects, thanks to open shelving, desk thanks to flaps. The same elements can be used for cooking space, etc. Furnishing also included a chandelier made of oxidized brass and “Cristallux” spheres.