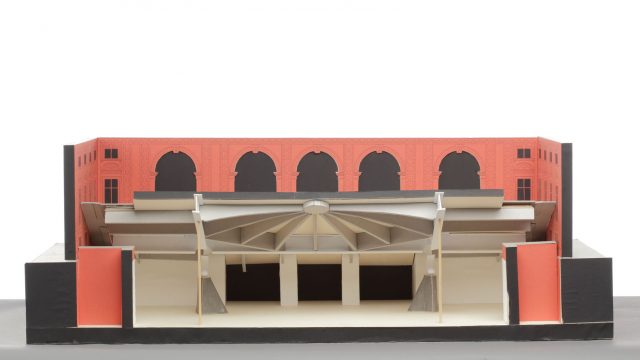 The Carignano Palace was built as a company of Prince Emanuele Filiberto by the architect Guarino Guarini between 1679 and 1683. The building consisted in two wings and a main body in exposed brick facing Piazza Carignano. After 1848, an elliptical hall was added, which would be the seat of the Subalpine Parliament. This body suppresses the garden and transforms the complex into a block with an internal courtyard.

There came an initiative for the centenary of the unification of Italy because of the decay in the first half of the twentieth century and maintenance problems for the use of the building. It contained the restoration and functional recovery of Carignano as the headquarters of the Museum of the Risorgimento. The biggest interventions, under the direction of the architect Andrea Bruno, were on the roof and under the courtyard.

The project of the Sala Ipogea of Palazzo Carignano dates from 1985 after the interventions involving the roof and the seventeenth-century facades. The lack of a conference room and space for the cultural and scientific functions of a modern museum, led to the reconsideration of the space of the ancient garden represented by the courtyard enclosed by the two buildings of the Palace.

A large room has been designed and built with underlying spaces for the complex plant requirements. There are 4 large reinforced concrete pillars which support the metal support beams of the roof slab. Above these concrete pillars, there are 4 large skylights which illuminate the underground hall with zenithal light through the courtyard floor. The inclusion of the underground room, thus the addition of the conference room, does not change in any way the appearance of the courtyard itself which is repaved with a continuous cobblestone. Nor does it interfere visually with the spatiality of the central courtyard.