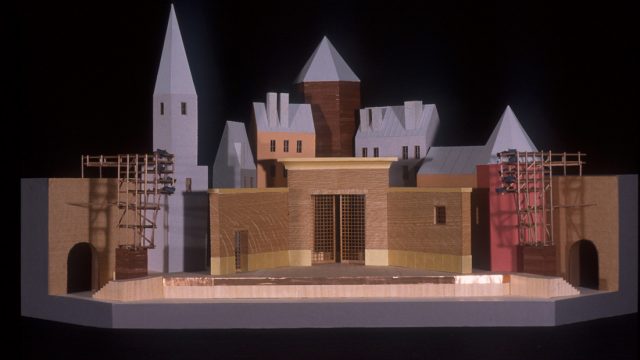 Author:lablog
Category:Aldo, Rossi, Aldo, Uncategorized
Tags: Ravenna, Rossi
← Comuni, Capanna, 1991
Achille Castiglioni, Allestimento Bticino, Fiera Di Milano, 1997 →
Lucia di Lammermoor, Aldo Rossi
The different scales in the works of Aldo Rossi awakens a reflection on the real and the unreal, the fantasy and the rationality in communion. This is the tone of the stage work for Lucia di Lammermoor, a tragic drama adapted from the novel by Scott W de Donizetti, which takes place in Scotland at the end of the seventeenth century, where Lucia is forced to marry a man she does not love to solve the family’s financial problems.
On the scene, all the volumes that define the city are supported by a tubular structure, with fixed panels of 5/6 centimeters thick.
These structures and the gothic city wall are all that the viewer sees, with the tubular structure apparent, since the panels only cover the front part.
The walls of the houses are clear and simulate an irregular and worn plaster. The central tower is lined with dark wood slats and the copper roof.
At the front there is the brick wall, which embraces the stage, with an iron gate in the central part, and with a window and a small door, also of iron, on the sides.