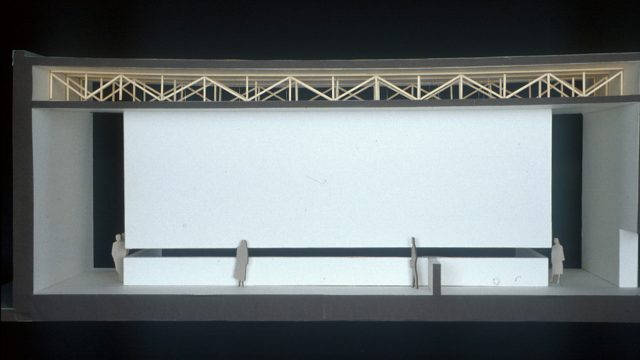 In the Castiglioni’s work at the Montecatini the only one vertical element between the two infinitely fleeting parallel planes of the floor and ceiling is the spectator. The magic created by these relationships makes the spectators spontaneously go under the six large bright light ducts cut in the thickness of the ceiling and invisible from far.

Inside these wells the images of the exhibition, which foretell the changes due to chemistry.

The exhibition’s final hall has an enormous well on the floor on which the inspectors look out as they circulate around it: a well with a mirror bottom as if it were a low mirror ceiling. The play of reflections creates two opposing infinite depths in which minimal movement of the human figures facing each other is reflected and exaggerated provoking “an extraordinary flow and movement from a tower of Babel in which everyone nevertheless finds himself again, and no gesture is lost”.