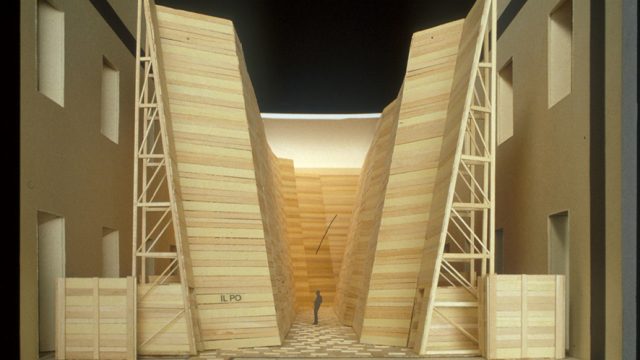 The exhibition ‘Vie d’acqua da Milano al mare’ (Waterways from Milan to the sea) had the aim of bringing to the attention of the public the serious problems of traffic on the Lombard territory. And it proposed an inventive solution through the creation of a navigation system in Northern Italy. The entire installation, both the walls and the floor, was made with wooden bridge boards in order to recreate the atmosphere of the river world. The final part of the project was set up in the caryatid hall, where there was a passage with a linear development defined by sloping walls which, scenographically, evoked a sort of navigable canal. In the same room there was a preparation made with video projections and sound recordings that gave a comparison between the reality of the Po and that of the Rhine.