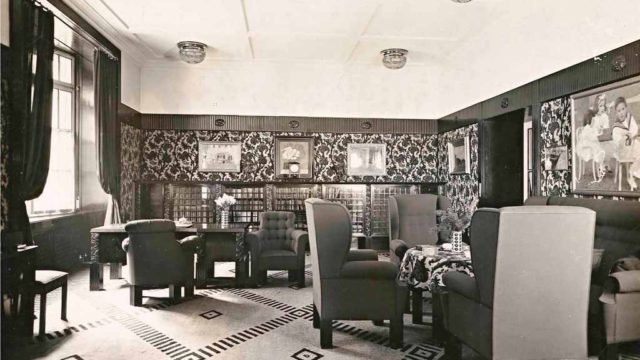 In 1910, Moriz Gallia acquired a building that was to be the site for his future family home. He demolished the premises and in its place constructed a new building of five storeys, an attic and a basement. The family’s apartment was located on the first floor. The remainder of the floors were let, with the hope that their children would one day occupy them. In 1912, Moriz Gallia commissioned architect and designer Josef Hoffmann to design five rooms for the family’s new apartment: the hall, salon, smoking room, dining room and boudoir.

Hoffmann’s designs included the furniture, both built-in and free-standing, the plasterwork, the woodwork, light fittings, wall coverings and floor coverings. He also supervised the making of all aspects of his designs by specially selected craftspeople. The boudoir was the room in which Hermine Gallia entertained her friends. White painted wood, gilded detail and tapered legs gave the boudoir furniture a sense of lightness and refinement. In contrast, the furniture for the hall was made from ebonised (black-stained) wood, the darkness of the wood, its solid, square design, and the vertical fluting giving the furniture a monumental quality. When Hoffmann undertook work on the Gallia apartment he was already an established architect, having completed commissions for both the Purkersdorf Sanatorium in Vienna and the Palais Stoclet in Brussels. His work at this time had entered a Neo-Classical phase, combining Classical design elements with a richly decorative aesthetic.

The Gallia family lived in the apartment for 23 years. Moriz Gallia died in 1918 and by the time Hermine died in 1936 the children had all moved into their own apartments in different parts of Vienna. The contents of the Hoffmann rooms were divided between them.

Before the Second World War, like many Jewish families, the Gallias were forced to flee Austria. They emigrated to Australia, taking all their household belongings with them. Much of the apartment’s contents, including furniture, carpets, glass and silverwork were eventually acquired by the National Gallery of Victoria, as well as a portrait of the Gallia children by Ferdinand Andri. The portrait of Hermine Gallia by Gustav Klimt was purchased by the National Gallery in London.