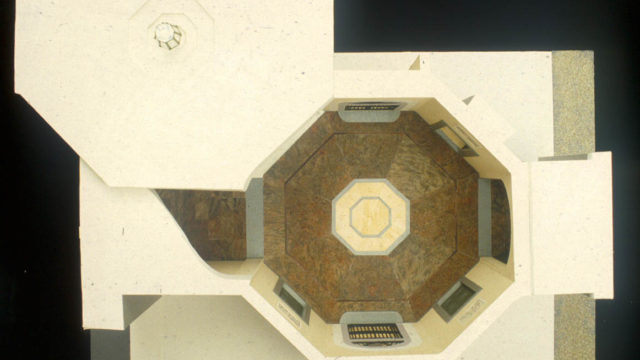 Giacomo (nicknamed Mino) Fiocchi (1893 – 1983) is an Italian architect. He is a member of the Fiocchi family, a well-known family company for selling hunting ammunition and cartridges. In 1921 he won the Camillo Boito competition for the new regulatory plan of Isola Comacina, where a village for artists was to be created. His won this price by combining rustic and local tradition with functionality and also because of how well it is adapted to the existing environment. He created the “Gruppo di Studio Sant’Orsola”, a group consisting of different designer of his time like Gio Ponti, Giovanni Muzio and Emilio Lancia.

The entrance is the most spectacular part of the building. This octagonally shaped room branches out into a number of different rooms without forcing a hierarchy. Decoration wise, the doors are more than purely functional element and define the outlook of the room. In the middle, a lantern lights up the room.