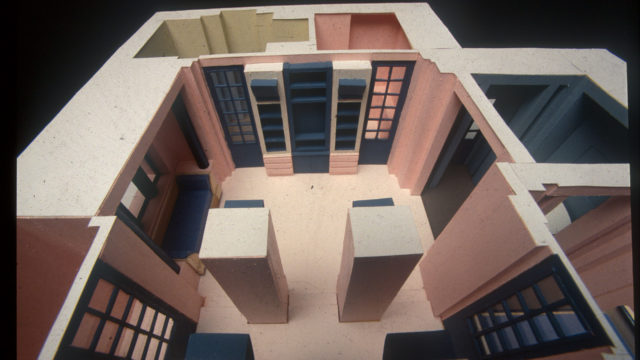 Michael Graves, (born July 9, 1934, Indianapolis, Indiana, U.S.—died March 12, 2015, Princeton, New Jersey), American architect and designer, one of the principal figures in the postmodernist movement. Graves earned a bachelor’s degree in 1958 from the College of Design at the University of Cincinnati, Ohio, and a master’s degree in architecture (1959) at Harvard University.

As he was a disciple of Modernism, his early architecture in the 1960s was imbued with its spirit: predominantly white geometric volumes composed with clean, sparse lines with no ornamentation. His adherence to the principles of Modernism helped to identify him in the late 1960s as one of the New York Five, a group of influential East Coast architects who wholeheartedly embraced the Modernist movement. (The other four members were Peter Eisenman, Charles  Gwathmey, John Hejduk and Richard Meier.) However, opposition to the coldness and rigidity of that vernacular was rising.

Apartment in New York is a set of fully furnished rooms that actually lives in storage at the Brooklyn Museum. Built between 1979 and 1981 for Susan and John Reinhold, the suite within their duplex at 101 Central Park West was donated to the museum when the couple divorced in 1986. Preserved in situ, the rooms are a rare surviving example of interior postmodern architecture.

The couple, prominent members of the art world, asked Graves to turn a bedroom into a playroom for the couple’s daughter, and remodel the guest suite into a library. Prior to Graves, however, the Reinholds gave their apartment star treatment: the first renovation was done by Robert A.M. Stern and John Hagmann in 1971.  Stern and Hagmann removed walls, ceilings, and thresholds in the unit to create a smooth, all white interior. Graves’ renovation complemented the previous one with a pale blue, yellow, brown, and white palette.

The library was modeled on a basilica, the central nave flanked by aisles of bookcases. Except for one, the bookcases are styled into pared-down columns. The top of each column conceals a light fixture, adding a soft glow that is complemented by the coffered ceiling, its topmost section painted blue. Graves placed a Corbusier-inspired mural of his own design in the space where an alter would have been. The materials throughout were ordinary plywood and sheetrock.

Brooklyn Museum Has a Pristine Postmodernist Apartment Tucked Away in Storage