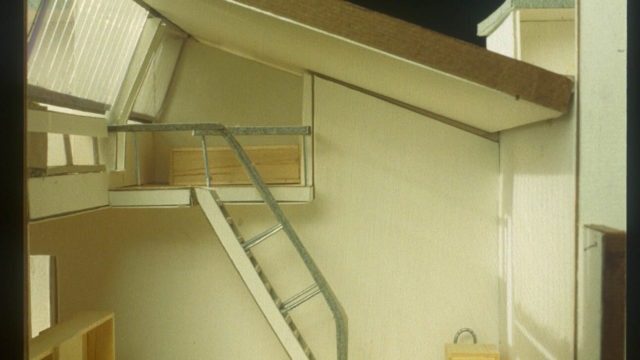 In 1921, the University of Paris and the city agreed that the many students who came to the capital for study but could not find a suitable or affordable housing needed new premises. Le Corbusier created his project of an university residence.

His idea of such an university residence was linked with his visit to Carthusian monasteries in Firenza : “What the students wants in a monk’s cells, well lit and well heated, with a corner to gaze at the stars. He wants to be able to find ready-to-hand whatever he needs to play sports with his fellows. His cell should be as self-contained as possible”, he wrote. In the plans he designed, the main architectural detail is that the cells are upwards-oriented.

The building is composed of exactly identical cells separated by walls : each cells have its vestibule, its kitchen, its living room, its sleeping loft and its roof garden which student has access thanks to a stair-ladder. Le Corbusier insisted that each should have  shower in his or her room, as well as two closets, a sink and the sitting/study/sleeping room. There were also commune parts where students could be gathered : courts, playing fields, gardens and the closely cropped tree screens.

Le Corbusier often said that the reconciliation between the particular and the collective was the greatest challenge of both modern architecture and modern life. He tried to do that here by designing a living space for many students with commune parts and private parts as self-contained as possible, exactly the same for rich and poor students.