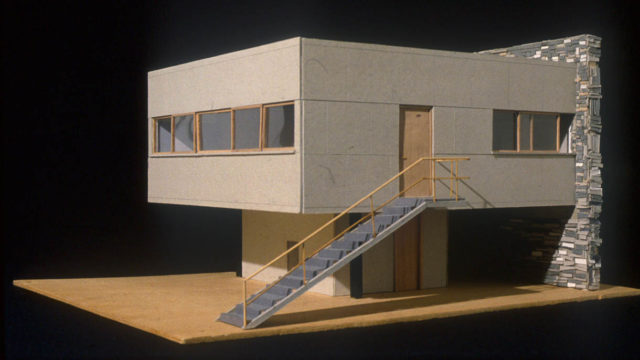 In 1928, the French government passed the “Loi Loucheur”, a financial investment program for popular housing that was also meant to stimulate the steel industry. In response, Le Corbusier imagined the design of the Maison Loucheur, which enters in a politic of the industrialization of housing : the elements of the houses are combinable and built in factories with insulating and lightweight materials. All the elements leave the factory in wagons, with the interior equipment too and the houses are built on the spot within a few days. Le Corbusier insists on the use of the word “equipment” and no more “furniture” in those houses because it leads to a housekeeping more adapted to the role of modern women according to him. This concept additionally allows to avoid the climate constraints, to use specific materials adapted to the environment of the house and to include local labor. The frame of the Maison Loucheur allows different combinations : if the original house is 45 m2, it is possible to combine two, three or four to obtain houses of 90, 135 or 180 m2.

In addition to answering the economical laws of industrialization, Le Corbusier’s design embraced an esthetic preference : the use of reinforced concrete was regarded as best expressing the orthogonal concept of architecture, which Le Corbusier particularly liked because of its way to output proportions. It enable the realization of large geometrical forms and volumes.

Besides, the Loucheur project was primarily known for the thick stone wall separation which was erected between two houses. Le Corbusier defended its presence with practical arguments (it acted as a firewall between the houses and it was a gesture of a reconciliation toward the local actors who could face redundancy). These walls became the symbol of a regionalist-oriented architecture, and an expression of solidarity. In the Maison Loucheur, there are two iron pilings which carry the floor of the house, creating a sheltered open air space.