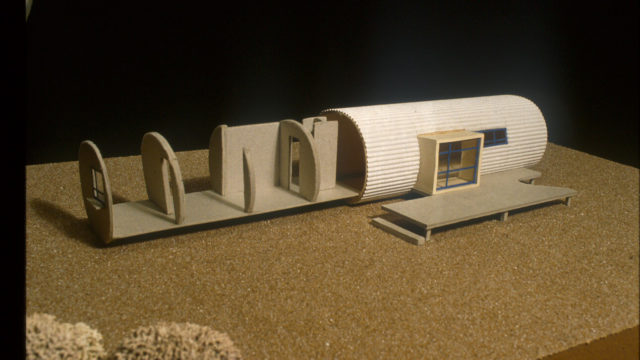 This was intended to be prefabricated and erected quickly as emergency housing or for summer camps. Tube House is an unique house design with a long tube shape (cylindrical shape) that maintains a low height. Tube house has just ground floor. The central space is the biggest where the living room, kitchen and bathroom is located. Smaller room is located on the both sides of central space. This house has a good natural light because windows are located on all sides and the large glass door is situated on the central space. The Tube house has a terrace of almost the same size as the house. Extent of the house is 8m x 4m. This Tube House was created in France in 1939 by Eileen Gray.
The goal here was to not only build inexpensively but to also do it fast. In this time these types of house are becoming more popular. These types of house are used as cottages which can be placed almost anywhere because they are often placed on wheels. Even the hostels is also built from these houses.

Eileen Gray was born in Enniscorthy, County Wexford, Ireland in 1878, Eileen Gray spent her childhood in London and was among the first women to be admitted to the Slade, where she took up painting in 1898 before undergoing an apprenticeship in a London lacquer workshop. The experience she gained in working in this highly specialised medium was to influence her profoundly when she moved to Paris in 1902. After further training in lacquer work and cabinet making, she quickly established herself as one of the leading designers of the lacquered screens and decorative panels so beloved by the followers of art deco, and even managed to cause a riot by showing a stark white lacquered boudoir at the 14th Salon des Artistes Décorateurs in 1923.
The inter-war years also saw Eileen Gray’s ‘Centre des Vacances’ project, which was shown in Le Corbusier’s Pavilion des Temps Nouveaux at the Paris International Exhibition of 1937.