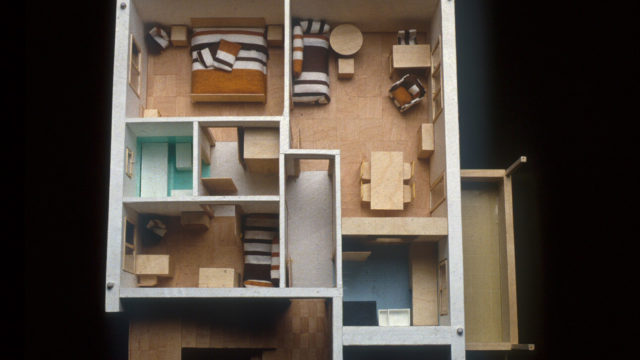 Alexander Klein was an architect from the beginning of the 20th century. He is originally born in Odessa (now Russia) but he was mostly active in Germany, Palestina and America. He is most known for his work around the existenzminimum.

The existenzminimum was a new idea on how to live during the interbellum. After the first world war there was much destroyed and a lot of people needed a new home. The architects of that time thought that small costly-efficient buildings were the answer. And this was executed in terms of minimally-acceptable floorspace, density, fresh air, access to green space, access to transit, and other such resident issues.

Klein’s design in Bad Durrenberg is a very good example of the existenzminimum. It is a neighbourhood with a lot of big apartment buildings in rows parallel to each other. In one apartmentbuilding there are a few common stairs and on each floor one staircase provides access to two apartments. One apartment exists of a living area with a dining area, a kitchen, a bathroom and 2 or 3 bedrooms. Every apartment has also its own terrace. All rooms are as small as possible but in a way it is still bearable to live. The separation between the kitchen and the dining area is however not a wall but a big cupboard from floor to ceiling and from wall to wall. In the cupboard there is a hatch that you can open so it is possible to communicate between the different rooms. The kitchen and bathroom are minimalistic but with clean materials so it forms a healthy environment to cook and a hygienic place to wash yourselves. All these things about small spaces, hygienic rooms, access to fresh air through a terrace and good accessible apartment buildings that form a neighbourhood show it is characteristic example of the existence minimum.