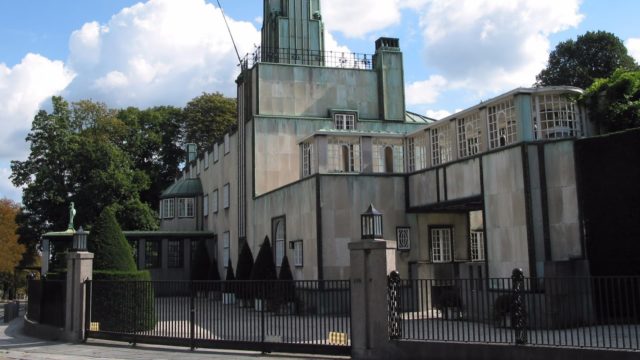 When banker and art collector Adolphe Stoclet commissioned this house from one of the leading architects of the Vienna Secession movement, Josef Hoffmann, in 1905, he imposed neither aesthetic nor financial restrictions on the project. The house and garden were completed in 1911 and their austere geometry marked a turning point in Art Nouveau, foreshadowing Art Deco and the Modern Movement in architecture. Stoclet House is one of the most accomplished and homogenous buildings of the Vienna Secession, and features works by Koloman Moser and Gustav Klimt, embodying the aspiration of creating a ‘total work of art’ (Gesamtkunstwerk). Bearing testimony to artistic renewal in European architecture, the house retains a high level of integrity, both externally and internally as it retains most of its original fixtures and furnishings.

The Stoclet’s house is one of the most refined and luxurious private houses of the twentieth century.The sumptuous dining and music rooms of the Stoclet Palace exemplified the theatrical spaces of the Gesamtkunstwerk, celebrating sight, sound, and taste in a symphony of sensual harmonies that paralleled the operas of Richard Wagner, from whom the concept originated. In his designs for the Stoclet Palace, Hoffmann was particularly attuned to fashion and to the Viennese identity of the new style of interior, even designing a dress for Madame Stoclet so that she would not clash with her living room decor as she had while wearing a French Paul Poiret gown.

Along with Hoffman, other famous artists such as Gustav Klimt, Richard Luksch, Michael Powolny, Koloman Moser and Franz Metzner participated in this task and together created a residence that was elegant, modern and functional at the same time.

The villa became a UNESCO World Heritage Site in 2009. The mansion is still occupied by the Stoclet family and is not open to visitors.