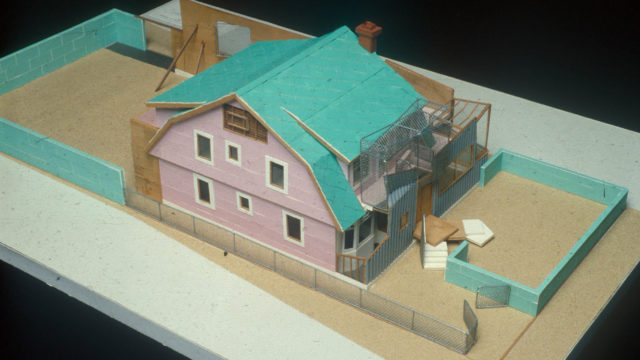 When Frank Gehry and his wife bought an existing house in Santa Monica, California, the neighbors did not have the slightest idea that the corner residence would be soon transformed into a symbol of deconstructivism. His solution was a bold one in the 1970’s that involved the “balance of fragment and whole, raw and refined, new and old and would strike up controversy.

Ever the contrarian, when it came time to create his own space, Gehry did not build himself an extravagant and shockingly original building, as those might expect of a master architect. Instead, he did what so many Americans do – he found a quaint suburban bungalow on a shaded, quiet street, and moved in.

Gehry wanted to explore with the materials he was already using – metal, plywood, chain link fencing, and wood framing. It makes use of unconventional materials such as chain-link fences and corrugated steel.

Gehry actually did keep the existing house almost completely in tact, but not in a conventional manner. The Dutch colonnial home was left in tact and the new house was built around it. Holes were made, walls were stripped, torn down and put up, and the old quiet house became a loud shriek of contemporary style among the neighboring mansions – literally. Neighbors hated it, but that did not change the fact that the house was a statement of art entwined with architecture.

Gehry’s design wrapped around three sides of the old house on the ground floor, extending the house towards the street and leaving the exterior of the existing home almost untouched. The interior went through a considerable amount of changes on both if its two levels. In some places it was stripped to reveal the framing, exposing the joists and wood studs. It was repaired according to the addition, showing both old and new elements. This is especially evident when walking through the rooms of the house and passing by both new doors placed by Gehry and older ones originally in the house.

The entrance is barely discernible amidst the jutting angles of the exterior, which Gehry created from wood, glass, aluminum, and chain-link fencing. The apex of the old house peeks out from within this mix of materials, giving the impression that the house is consistently under construction.

In 1991 due to the Gehry family’s growth which involved two boys, the house had to be expanded. Even though Gehry tried to maintain the same style of the house, allowing the original design to determine that of the addition, the house went through significant changes. The residence became much more “finished” which in turn stirred up the angry voices of those who felt strongly about the original raw deconstructivist aesthetics. Nonetheless the Gehry House is still a classic among California’s architectural works.

A classic pink bungalow with a shell of hard edges, neither element would be complete without the most important feature of this Gehry creation: the artist himself.

Sometimes is this house considered one of the earliest deconstructivist buildings, although Gehry denies this.

As of 2016, the house is still owned by Frank Gehry. Although he has almost finished construction of another residence overlooking the Rustic Canyon, he plans to keep the Santa Monica house in the family.