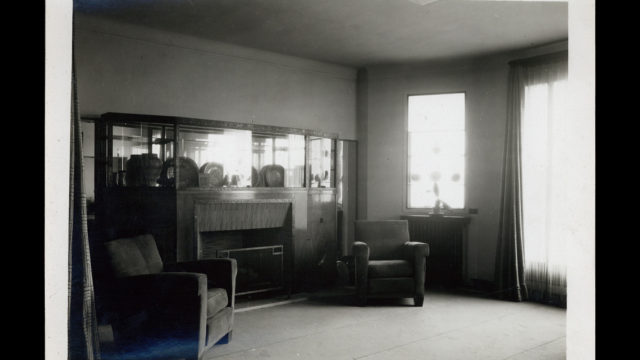 Francis Jourdain was a painter, furniture maker, interior designer, maker of ceramics, and other decorative arts.

In 1911 Jourdain began to design furniture, following the teachings of Adolf Loos (1847–1933). He opened Les Ateliers Modernes in 1912, a small furniture factory. He designed modular wooden furniture for working-class people, advertising in the socialist paper L’Humanité. With his built-in furniture and storage systems he was able to make small areas appear spacious. He owned a furniture shop by 1919, Chez Francis Jourdain. Jourdain was a regular exhibitor from 1913–28 at the Salon d’Automne and the Societé des Artistes Décorateurs. Jourdain published many articles on modern art and aesthetics in which he attacked the ostentatious luxury that was typical of contemporary French design. His own designs were simple, with straightforward construction. He collaborated with Le Corbusier.

His design used smooth wood paneling on the walls and ceilings that resembled riveted sheets of metal. He worked with Robert Mallet-Stevens (1886–1945) between 1925 and 1930.