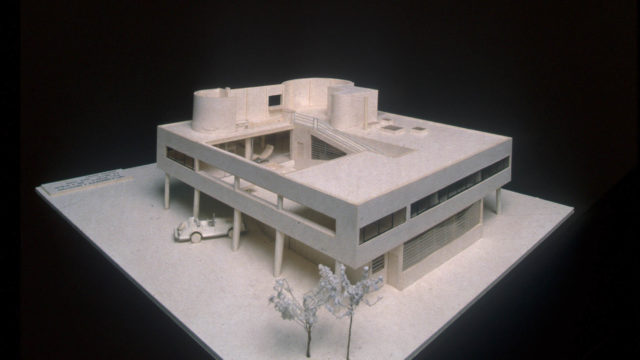 Villa Savoye is one of the best known example of the modernist, international Style.  It was created by famous architect  Le Corbusier and his cousin Pierre Jeanneret for Savoye family in 1928. The house had been building for 3 years, since 1929. It is made of reinforced concrete.

Le Corbusier created a few different alternatives, all very expensive, in the end the cheapest option was chosen. During building there were lots of problems, for example with leaking roof or erosion. That is why original budget had to be doubled. During World War II,  it was damaged and then renovated and reconstructed two times by different architects.

Building is located in the middle of the garden, in a special position which considers orientation of the sun and the view. Columns were used for raising ground floor to the first floor, that make an impression that house is eulogizing over  the ground.  Neutral colours, garden on roof and simple cubature have great coordination with the landscape.

Since 2016 project is a part of UNESCO Word Heritage Sites.