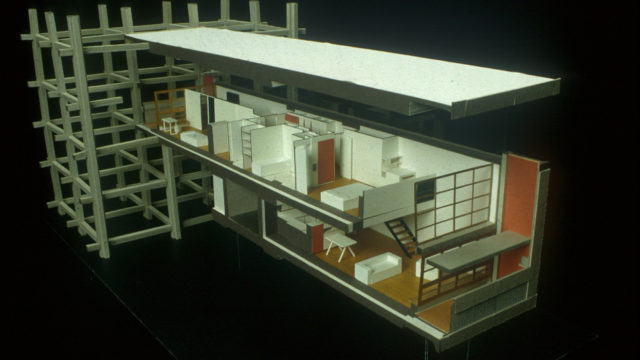 It was designed by Le Corbusier and Nadir Afonso and known as “Radian City” or “The Nutters House”. It has been building for 5 years, since 1945 and it is a great example of modernist, brutalist architectural style.

The project was created because of the needs after World War II- flats had to be cheap, economical and had to give sufficient living conditions for the large group of people (in that case:  for 20 000 people). Architects ensured, that everyone will have an access to “the sun, landscape and greenery”. It is in accordance with architecture “Five Points” thesis (pilotis, functional roof, free floor plan, long horizontal windows, free design of the façade).

Firstly, it had to be done with steel frame, but it was too expensive, and permanently it was constructed in beton brut. It contains 337 apartments arranged over 12 floors. Every flat has two levels, balcony and link both sides of the building. The roof is a common terrace, there is a running path and a pool for children there. The whole complex incorporates shops, sport, medical and educational centre, hotel and restaurant.

This project had a huge influence on the architecture style since 1955: the same solution in Nantes, Berlin, Briey, Firmin, and was almost an inspiration for new projects in England. Since 2016, Unités d’habitation in Marseille is a part of UNESCO Word Heritage Sites.