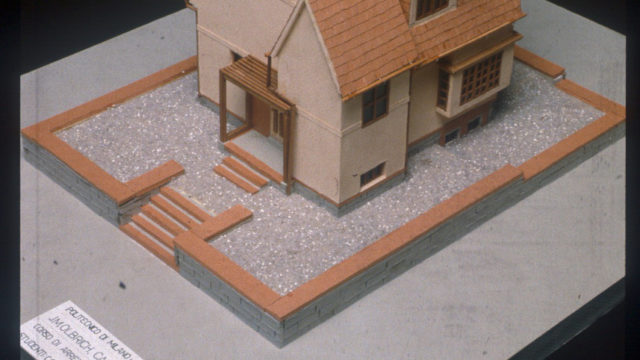 In 1899, Joseph Olbrich was called to Darmstadt to build a group of residences and exhibition environments on a hill near Kunstler Kolonie, a group of artists protected by the sovereignty of E. L. van Essen. In the buildings he designs ground-based accommodation, gardening furnishings, exhibitions, and publishing. The complex, inaugurated in 1901 with an exhibition featuring the group, was later enriched with new buildings for a second exhibition.

Olbrich was given responsibility for the construction of the “Arbeiterhaus Opel” (the Opel house for workers) sponsored by Ernst-Ludwig-Verein, the central company of Hesse, and more specifically by the financing of six industrial buildings. The individual houses like the Opel house, according to their standards, needed at least three rooms and the building blocks for a single-family house could not exceed 4,000 marks.

The exterior construction is made of stone and bricks, provided by J. Wagner. The roof is covered with flat tiles and the remaining walls are plastered. The furniture were produced by the Schneider Brothers company in Düsseldorf.

Internally, the ground floor consists in a large multipurpose room, illuminated by two large opposite windows and a small area for the kitchen.

A poet spiral staircase leads to the upper floor where there are two identical bedrooms and a bathroom. The rooms are light but bright and decorated. The living area, with exposed wooden beams and its floral friezes, is divided in three areas: lunch, rest and work. Olbrich, puts into practice the principles, so far attributed to the bourgeois typology: living room and bedrooms are assumed as well as central reasons.