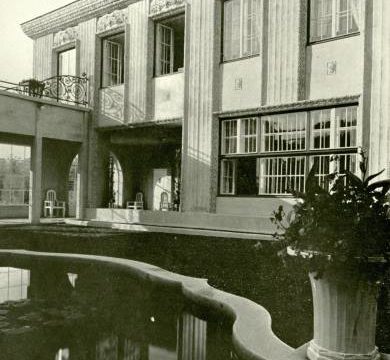 Villa Ast built by Josef Hoffmann for the building contractor Eduard Ast from 1909-1911. The two-storey house, resting on a pedestal, is strikingly different from the architect’s earlier buildings and is the highlight of his work in Vienna. The simple structure has a classical look (windows with simple decor and characteristic wavy facade). The cubic, almost unadorned house looks like a layered structure with its fine plaster architecture, and in front of the portal is an open porch with a Bacchatinnenfries by Anton Hanak.” In the course of the extension of 1934 Hoffmann created another frieze in the upper storey by surrounding, almost square Window.”

The painter Carl Moll acquired the villa, which had been exclusively furnished by Josef Hoffmann for his stepdaughter Alma, the wife of Gustav Mahler, who lived here until 1938, most recently with her third husband, Franz Werfel (second husband Walter Gropius). The villa was at that time a spiritual and cultural center of Vienna:Alban Berg, Egon Friedell, Gerhart Hauptmann, Gustav Klimt, Oskar Kokoschka, Thomas Mann, Hans Pfitzner, Arthur Schnitzler, Arnold Schoenberg and Bruno Walter were here. Returning from exile in 1945, Alma Mahler-Werfel sold the property by 40,000 Swiss francs.