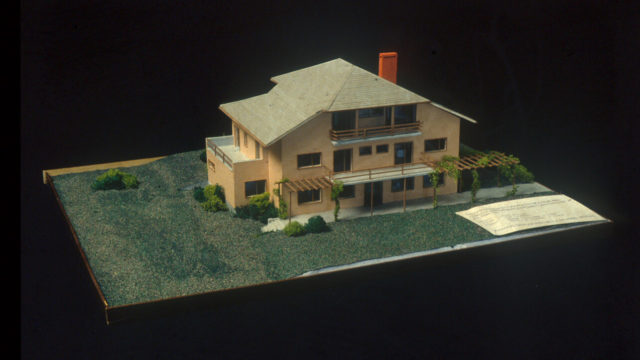 Von Prittwitz was a culture aristocrat who served as German Ambassador in Washington during the Weimar republic. On Hitler´s accession he resigned, and to conserve his diminishing fortune he decided to sell his country house at Tutzing on the shores of Starnberger See just south of Munich, retreating to a modest new house to be built in its ground. The choice of Häring as architect was occasioned by friendship between Frau von Prittwitz and the Krutina family. The first project dated from June 1937, and the building was evidently under construction through the summer of 1938, with Häring still drawing details until the early autumn. Frau von Prittwitz remained in the house until her death in the late 1980s, and it was perfectly preserved with its original furnishings and decoration. It has since been taken over by an adjacent conventbut is listed as an historic building.

A pair of plans in the archive shows a very radical initial project for the site, of which Häring also later drew the isometric projection. Whether this was an ideal version for himself or an exploration actually shown to his clients is unclear, but he must have known it was tottaly unrealisable under the prevailing plannig conditions and too extravagant in size. He seems to have started with an axis of entry, which run precisely south-south-east across the lakeside plot and parallel to neither boundary. Taken from a north points at the top of the drawing, this axis determines the main orthogonal system of the house, most of its partitions, and the consistent north-north-west bed orientations. Its systems broken by a series of curving walls, at the north end accommodating the arrival of the car, at the east side following the site boundary, and on the south west embracing a great multi level living room. Numerous terraces, bays, pergolas and other devices mediating between inside and out enrich the side facing south and lake, as opposed to the hard protective wall to north.