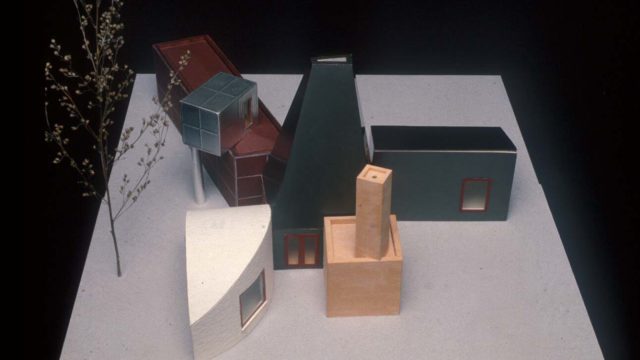 Frank O. Gehry (28 February 1929 in Toronto) is American – Canadian architect well-known for postmodern designs including the Walt Disney Concert Hall (Los Angeles) and the Guggenheim Museum in Bilbao (Spain). Gehry is known for his choice of unusual materials as well as his architectural philosophy. His selection of materials such as corrugated metal lends some of Gehry’s designs an unfinished or even crude aesthetic. This consistent aesthetic has made Gehry one of the most distinctive and easily recognizable designers of the recent past. Critics of Gehry’s work have charged, however, that his designs are not thoughtful of contextual concerns and frequently do not make the best use of valuable urban space.

Space the single-story structure is comprised of two bedrooms with full bathrooms, a central living room, fireplace alcove, loft, kitchenette and garage. This house has 2300 square metres. Material and Form the sculptural building is composed of six geometric-forms clad in a variety of finishes and building materials to differentiate and divide the space: a thirty-five foot tall pyramid-shaped living room finished in black painted metal; a curved bedroom covered in dolomite limestone from southern Minnesota, a cube-shaped fireplace alcove faced in brick; a large rectangular garage and kitchenette covered in Finnish plywood and aluminum strips; a smaller rectangular loft in galvanized steel is supported by column clad in the same material; and a rectangular second bedroom with a slanted roof also finished in black painted metal.

This house was initially situated on the Winton’s 12-acre Lake Minnetonka property the guest house was moved in 2008 to Owatonna where it still stands.