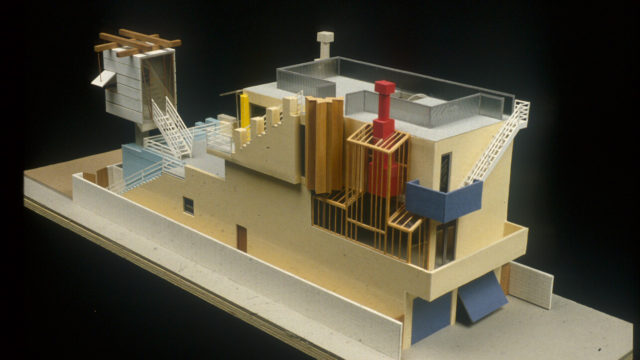 Frank O. Gehry (full name: Frank Owen Goldberg) was born in Toronto, the 28th of February 1929. He studied at the University of Southern California and this is where most of his creations were build. He started his own studio in 1962 in Los Angeles, called Frank O. Gehry Associates and in 1989 he received the Pritzker Price.

As said above, he was most of the time active in California, and among his famous accomplishments are the campus from the Loyola Law School, the California Aerospace Museum and the Binoculars Building. But he didn’t only work in the States, the Dancing House in Praag and the Guggenheim in Bilbao are maybe even more famous than his American designs.
He’s known for the movement his buildings seem to make. He adapts the textures and scale of the facade to give them a dynamic effect.

Norton House was designed in 1984 for Lynn and William Norton. It is famous for its eccentric form and ecclectic materiality. The house on the Venice beach walk has a view over the ocean and has lots of aspects in common with the home of Gehry itself, such as everyday materials, low costs, and sculptural forms.

While the first floor is covering most of the plot, the second floor, which contains the main living areas including a kitchen and living space, is set further back to maintain privacy. The rooms itself are mainly boxes placed upon eachother, connected with stairs and terraces. The studio, watching over the beach of Venice, reminds us of a watch tower from the coastguard. The whole thing holds together because every room and place is different, and in this way they’re the same. Using classic and cheap materials such as industrial staircases, kitchen tiles, rails and wooden pillars, he created a cheap house, but with architectural depth. The banality of the materials form a whole that exceed their materiality.