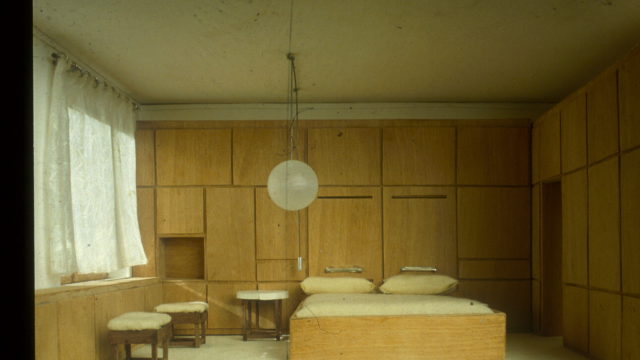 An apartment of Lucie Rie in Vienna was the first assignment of Ernst Plischke who was a pupil of Behrens. Plischke had known the artist from Otto Niedermaser’s atelier in the craft school. The first project was slowly developed in the studio of the architect I. Frank, where Plischke worked. In 1928 Lucie Rie approved Plischke’s latest proposal, which generated an effect of closure of the rooms. The walls were completely decomposable, no longer glued but screwed. The general construction consisted of carriers, continuous bases and doors made of large surface panels with non-visible hinges.

Plischke has decided to split the flat into two living halfs, using the curtains: the conversation-study area and the bedroom. The bed could be used in daytime hours as a sofa. The walls of the room were equipped with walnut wardrobes, incorporate doors, and made up of simple panels. The wall behind the bed provided a cabinet with a mechanism for hanging the blankets and pillows. Plischke had placed two lamps above the bed. The bedside table was stylishly insert inside a niche. And an invisible door allowed direct access to the bathroom. The conversation-study area had a corner fitted with bookcases, folding table, a sofa and two armchairs. The curtains were made of hand-made Swedish cloth or plain linen

The floor in all the rooms was coverd by special carpet of a natural color, that halped to a homogeneous effect. The apartment gives a feeling of tranquillity and simplicity.

When in 1913 Rie moved to London, Plischke disassembled the furniture and sent them along with his designs to Albion Mews, where they were reassembled by the architect Ernst Freud, son of Sigmund Freud.