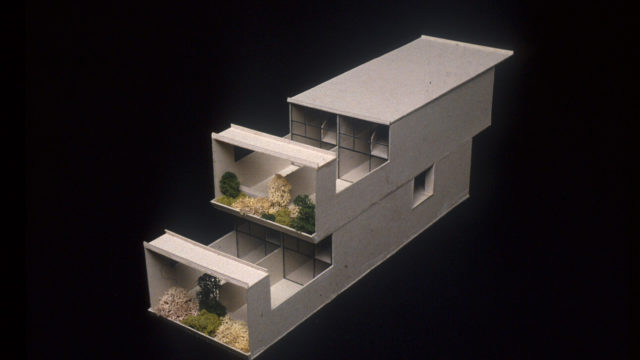 In 1931, a French new city plan for Algieri was published. Le Corbusier deeply disapproved of all the ideas and solutions contains in this project, so he created his own vision, which would raise Algier to the level of international city. It would “transform this desert into a new African oasis, an African paradise”.

The architect thought about cooperation between the building and the environment. Few ideas: topography (which is directing the circulation of traffic), sun, winds and views (which are directing the housing), would have an great influence on the shape of the cube. Project  consisted three main elements- a new business district at slated demolition side, residential area with the bridge spanning over and an elevated highway between suburban cities which contain 14 residential levels. Levels were a raw space for a working class and could accommodate 18 000 people.

So called “Plan Obus” was connecting idealized dwelling, mythic feminine and romantic landscape. “Obus” means “shell” and it would describing the helical form of the plan or concern to infrastructure within which flats could be constructed.

There were problems with finding sponsors and investments, France wanted reduced, more simple and less expensive urban plan. That is why, despite big amount of supporters, the project has never been built.