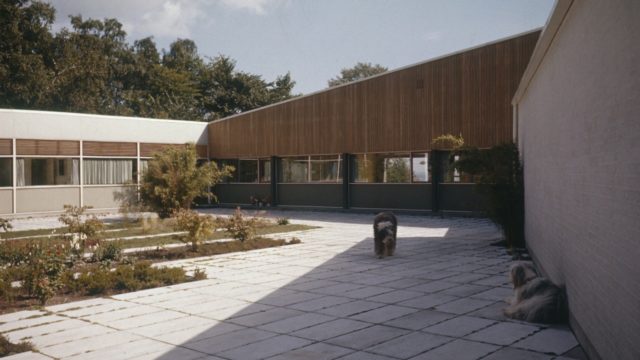 Jacobsen’s 1956 villa is interesting and rather complex, combining the quirky angles of his early 50’s projects with the cool international style of the following years. it has, however, been gutted and its new interior is not so much in bad taste as it is entirely out of scale with the delicate detailing of jacobsen. sadly, the same is true of the buildings added to the original house: they look as if they were built for people twice the size of jacobsen’s clients.

Arne Jacobsen was born in Copenhagen, 11 February 1902. He was a danish architect and designer.  He is remembered for his contribution to architectural Functionalism as well as for the worldwide success he enjoyed with simple but effective chair designs Educated of the school of architecture of the Academy of Arts. In the year that he made the Rutheven Jurgensen house was professor of Architecture, Academy of Arts, Copenhagen. Arne Jacobsen´s qualities do not lie in the application, to his well-designed works, of any special originality or any unusual wealth of imagination. But he is a highly gifted architect who has a supremely sure touch in working out his designs, who is extremely neat and clear in his architecture, and who, in his simplified compositions, is always aiming at a harmonic overall solution.