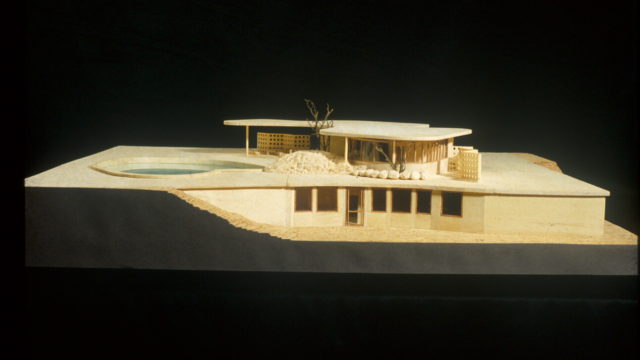 Oscar Niemeyer studied at the National School of Fine Arts in Rio. In 1936, he worked with Lucio Costa and other architects on the design of the Ministry of Education and Sana. He discovered on this occasion Le Corbusier, who had a profound influence on him.

From the interest of form as an expression of fantasy and beauty, Niemeyer overcomes the rigidity of functionalism and rationalism (while maintaining the great and positive influence of Le Corbusier). He doesn’t neglect the functional needs but ideally organizes them, in order to explore the unlimited expressive potential of new materials (especially reinforced concrete), which are necessary to impel new, curved, free forms. All these themes are already fully expressed in the home Niemeyer designs for himself in 1953 at Canoas.

Four years after setting up his own extra-urban house in Mendes, in the state of Rio in 1949, Niemeyer realized this other home for “the idea of ​​the free-form roof”. The house is built on an isolated site with a view of the sea, and it is designed to complement architectural spaces, open or closed, with the natural environment of water, rock and vegetation, so as to be in harmony with the surrounding vegetation.

It is structured according to the shape of the ground, following its contour without altering it (thus avoiding dirt and dust). Existing rock, which emerges from the ground, is not eliminated, and actually becomes the center of the composition by inserting it as a “decorative” element between the sinuous forms of the pool and the roof, penetrating the living room through a glazed wall. The house is designed to avoid hiding anything that can be left open: transparent from side to side, it ensures continuity between front and rear and also allows a view of the sea from the internal terrace surrounding the pool.

The roof, the pool and the big stone are the characteristic elements of the house. The roof appears almost suspended on thin pillars, and its sinuous shape aims to close the structure relatively further and integrate it into the surrounding nature; it protrudes all around the house, and on the pool side, creating shaded zones and protecting an outdoor living area.

The top floor is a unique large living room, kitchen and toilet are the only enclosed spaces. The free plant is allowed by an independent hedging that supports the cover; the living room, which is open on both sides, has a bent curved wall, lined with wooden slats, which delimits the television area.

The connection to the outside is made of fully glazed sliding doors and metal frames.

The internal staircase leads down to the ground floor and to the sleeping area where there are four bedrooms, three bathrooms, a small storage room and a living room which also serves as a vestibule. The ground floor is also visually connected to the outside by glazed walls, stressing once again the need for internal and external interpenetration.

Among the furniture of the house, we find a bench made of wood and straw in Vienna. Conceived precisely in relation to the designs of this house, it represents Niemeyer’s debut on the theme of furniture.