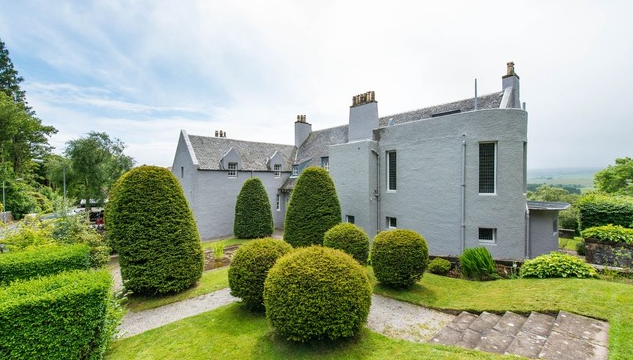 The WindyHill house is entered via a mosaic-floored porch which opens onto the North end of the hall at the foot of the stairs. The long, wide hall with windows to the East gives access to the drawing room with its West-facing canted bay, offering panoramic views of the high moorland; the playroom with canted bay at the North; and the dining room to the South. Behind a door at the South a service corridor leads East down several stairs to the kitchen and ancillary rooms. On the first floor, the narrow hall gives into a master bedroom with an adjoining bed, and three further bedrooms facing west.

The East side of the corridor contains a window alcove which overlooks the front garden and aligns with the curved dip in the boundary wall, allowing curious passers-by to be observed, unnoticed, from the house. Servants’ rooms facing South and back stairs are arranged above the kitchen and ancillary rooms.

The long, broad hall at Windyhill served two purposes: circulation and entertaining. The Davidsons, the first owners, used it as a dining room for large gatherings. Multi-functional halls, usually with a focal fireplace and staircase, were a typical feature of revivalist Victorian houses, and drew on historic traditions such as the Elizabethan Great Hall.

The tapering columns and lintel around the Windyhill hall fireplace recall the form of a garden gate,  connecting inside with outside. Mackintosh did not design all the interior fittings and furniture for the new house; the Davidsons brought existing furniture included earlier.