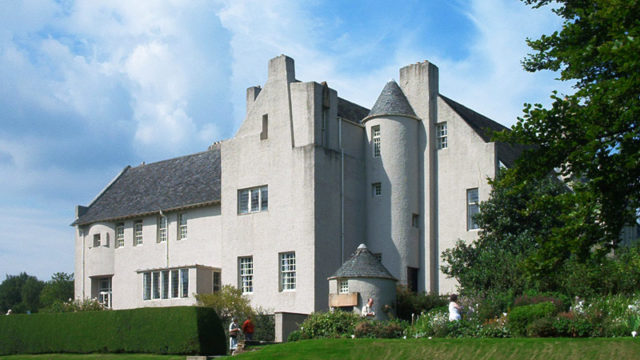 Hill House, the largest and finest of Mackintosh’s domestic buildings, occupies a hillside that looks out over the Clyde estuary. It is surrounded by grounds meticulously landscaped by Mackintosh, who went to the extent of instructing that the trees be clipped according to his manner of drawing them.

Built from local sandstone and rough-cast rendered, the house bears the image of Scottish baronial traditions. For the interior, Mackintosh designed fireplaces, furnishings and fittings. His attentions extended from the design of built-in wardrobes for the white bedroom to the detailing in a superb set of pewter fire tongs and poker. Walls in the house were generally white, some with delicate stencil designs in pale greens, pinks, and silver.

The mansion combined the Edwardian period’s traditional ‘femininity’ of an intimate, inside space, with the ‘masculinity’ of the exterior public world, both uncommonly used throughout the interior of the building. To Mackintosh, bringing the masculine aspects to the inside would break away from the over decorated, entirely feminine conventional interiors. This allowed him to convey different feelings and experiences depending on the purpose of each space.

Mackintosh used different materials, colours and lighting when necessary to perform a full experiential transition from one point to another. All in such an elegant and well planned manner, that with the absence of one the other would mar.