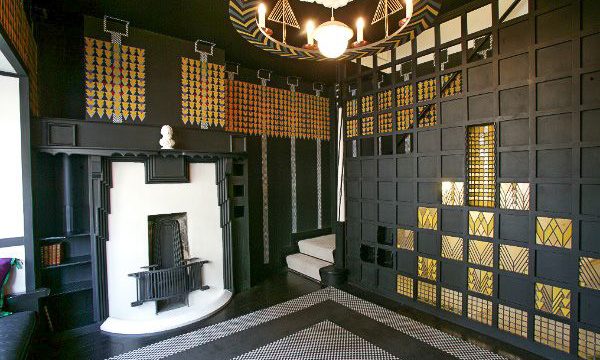 Bassett-Lowke house at 78 Derngate, Northampton, was famously re-modelled by Charles Rennie Mackintosh in 1916 for his client, Northampton model engineer, W.J Bassett-Lowke. Purchased for Bassett-Lowke by his father as a wedding present, the house had originally been constructed 100 years previously.

Characteristic elements of intervention in the Bassett-Lowke house in the bedroom:

The furnishing designs of this room, intended for guests, reaches the most extraordinary result of the post-glasgow period. The wall behind the beds and  the ceiling above them are decorated with elegant black-and-white stripes, chasing on the surface, forming 90° corners like the frame of a painting, imitating an ideal baldaquin bed extended to the entire room.

Despite this decorative pattern on the walls and the ceiling, which at first sight seems eccentric and oppressive,it sets the size of the room (about 4x4m).

Mackintosh also designed very simple light-colored lines with a narrow profile of blue squares on a slipway: a chessboard pattern also used in the footboard of the bed, which contrasts gently with the more linear decoration of the walls.

Characteristic elements of intervention in the Bassett-Lowke house  in the main entrance: