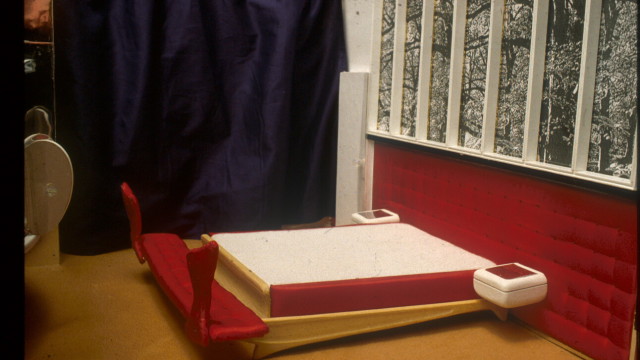 Mollino used to design the interior of his creations as a whole and consequently took in consideration every little detail. In this two-pieces apartment he conceived for Cesare Rivetti, he gives the impression of a dilated space thanks to a meticulous choice of forms, material and color. As he did in previous works, some walls are covered with mirrors and images to accentuate this feeling of a spacious apartment.

Mollino also organizes the space: the main piece is divided into two spaces thanks to a velvet curtain hung in the middle. Actually, a lot of furniture emerge from the sides or the ceiling of the apartment. In the “living room”, the cantilever sofa seems to come from the wall, as a detail of the picture being zoomed. The chairs around the main table in the dining room are similarly conceived: their legs disappear into the back, as if they were composed of a unique element. The bedroom, represented here, is almost just constituted of a big bed, which looks like prolonging the red quilted wall. At its other end, it finished with two chairs linked by their common base.

In the magazine “Domus”, Mollino compared the client to a butterfly coloring the architect’s novel (“romanzo dell’architetto”). The story he tells us here sounds like a dream, with all the elements merging, and this gives a characteristic impression of harmony.