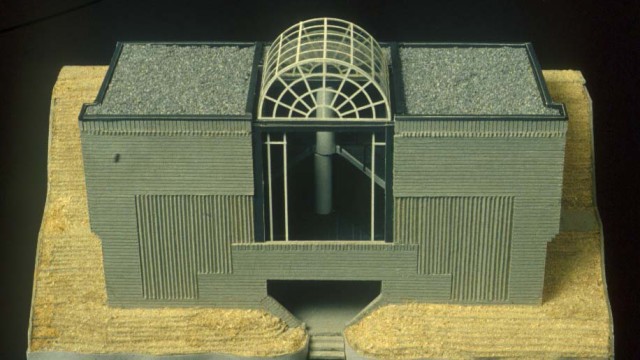 His designs tend to include a strong sense of geometry, often being based on very simple shapes, yet creating unique volumes of space. His buildings are often made of brick, yet his use of material is wide, varied, and often unique.

The house in Viganello, Ticino, Switzerland

House of Viganello is a massive brick building, except for the middle part that is created from glass. The rooms on the opposite sides are illuminated only by tiny windows. The already a massive impression is further enhanced by the fact that the house was built on the top of a hillside overlooking the village. It is the building of a symmetrical shape in the center is located massive column of circular cross section passing through all floors. This creates a support structure of ceiling and allowing the opening of the eastern part of the full height of the house.

The center of the house is in the western part of the garden is open and fully glazed. The space is covered by cylindrical surface consisting of glass plates in a metal frame. The house has 3 external staircase, two are located on both sides of the house and the third is located in the central aisle to point out the glass part of house. Another staircase is located in the northeast corner of the house, and connects the floors. Mario Botta used different shades of brick facade relief to support the axially symmetric of house. The ground floor has a generous hall, which is across the hall connected to two smaller rooms . The hall leads to two rooms, one closely linked to the bathroom. The entire space of the first floor occupies a generous living area connected to the kitchen and dining room and pantry. There is seating for the toilet.In second floor there are two bedrooms with private bathrooms.